Most of us think of this kind of state as ‘a coma’, but there are different levels of how aware and awake someone can be, and coma is just one of them.1

Medical professionals usually call these different states ‘disorders of consciousness’.2 You may also hear terms such as ‘vegetative state’3 or ‘low awareness state’, which are especially terrifying for any parent.

Here we hope to set out what these terms actually mean for your child.

But before we look at how a child’s consciousness can be affected by an acquired brain injury, it may be helpful to talk about what our ‘consciousness’ actually is.

Our consciousness can be broken down into two key parts4, 5:

Together these two elements make up our consciousness.

And there is a relationship between the two. Think of those moments before you drop off to sleep. Your ‘wakefulness’ is dropping away, just as you become less ‘aware’ of your surroundings and yourself.

Any kind of ‘disorder of consciousness’ is where there are difficulties with wakefulness, awareness, or both.

You may have heard of arousal programmes. These are designed to increase levels of consciousness. They involve carefully planned periods of stimulation (usually vision, sounds, touch, smell and taste) combined with periods of rest. Such programmes are controversial and there is dispute about how effective they are.

Having a child with a disorder of consciousness is incredibly difficult for any family. It can be very hard to know what to do. Children who emerge from these states are often confused and agitated. Sometimes, they may swear or be aggressive. This can be difficult for parents and family, but many parents find it reassuring to know that this is quite common.

Let’s look at the specific disorders of consciousness and what they mean.

I took to keeping a diary, and I gave myself a target of putting one positive thing down each day, be it a twitch, or an improvement in his heart rate. Like a lot of people, I’d thought that a coma was just something you woke out of one day. But it’s only when you experience it that you realise it’s a very gradual process."

A child is in a coma if their eyes are closed and they cannot be woken. They are not aware of their surroundings or themselves. Coma is different from concussion in that a coma lasts one hour or more.8

Children may spend some time in coma: perhaps a couple of days or perhaps many weeks. Some children will move from this level to a ‘vegetative state’.9

Let’s go back to the two things that make up our consciousness – wakefulness and awareness.

In a vegetative state, a child has ‘wakefulness’ – children will sleep and wake in cycles (though not necessarily at night and day).10  They may appear to be awake but will not show any signs of awareness of what’s going on around them.

The things children do in a vegetative state, such as moving their eyes, will be more out of reflex – a kind of autopilot.11 The term ‘vegetative state’ may sound deeply distressing to parents and family.

In some circumstances, this state can be permanent. But it can also be a transition stage that leads to further recovery. You may hear ‘vegetative state’ and ‘minimally conscious state’ grouped together as ‘low-awareness state’.

There are different opinions about these terms both nationally and internationally.13 Some people are uncomfortable with using ‘persistent’ or ‘permanent’ because there may be no certainty that the vegetative state is actually permanent. One suggestion is that healthcare professionals avoid these phrases, and instead refer to each individual child’s specific circumstances.12

Children in a minimally conscious state will have periods of being awake. They also show some signs of ‘purposeful’ behaviour – things they have meant to do, rather than ‘autopilot’ reflexes.

They might follow a person or an object with their eyes or fix upon a person on request. Some children in this state might be able to make some sounds or say words.14

But all of these responses are limited, often subtle, and not consistent. Much like a vegetative state this state may be permanent or it may be a stage that leads to further recovery15.

Sometimes called a ‘pseudocoma’, locked-in syndrome is very much as it sounds. People with this syndrome are both awake and aware. But they are unable to move or speak.

Locked-in syndrome is not strictly a ‘disorder of consciousness’, because the person is actually awake and aware. This syndrome is hard to detect, and can be misdiagnosed.16 It is more common in adults than in children.

The word ‘coma’ can be terrifying for a parent. But this scale is actually a standard observation to measure different levels of consciousness.

There is a version for children under five years old called the Paediatric Glasgow Coma Scale. It works through a set of questions such as ‘What is your name?’, ‘What day is it?’. A child might also be asked to wiggle their toes or hold up their fingers.

The healthcare professionals also carry out some observations, looking at how easy it is for the child to open their eyes, speak and move. A small light shining in the child’s eyes is to test their reaction to the light.

This kind of assessment might take place at the scene of an accident – paramedics are trained in using the scale. It will also take place at regular intervals at the hospital to check progress. 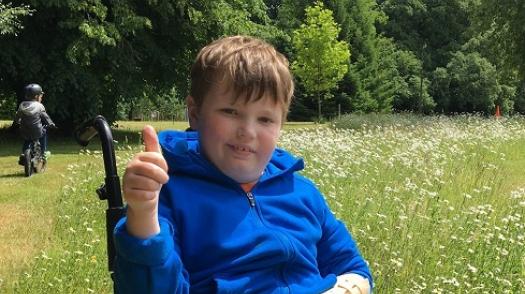 Jacob had surgery in March 2020, but the COVID-19 pandemic meant recovery time in hospital was cut short and Jacob had to return home. Jacob was offered rehabilitation at The Children’s Trust – mum Katie describes it as ‘life-changing’.

This section looks at the way acquired brain injury can affect the rest of the family.