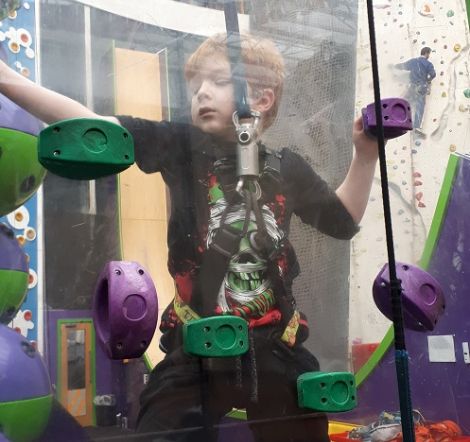 My son, Harrison, was six years old when he had an ischemic arterial stroke (in April 2018).

No one can find a reason why it happened, and no professionals recognised it as a stroke at the time, despite me repeatedly saying I thought it was.

My first thoughts were devastation and grief. And I was scared.

I was scared because I felt helpless, no one was listening to me and although I knew it was a stroke, I didn't know this could happen to a child... my child.

I’ve since been diagnosed with post-traumatic stress disorder after witnessing all but the actual stroke. School called me to ask me to go right away and check if I thought he was okay because he had fallen and banged his head... he was far from okay.

After carrying Harrison out of school I took him myself to our local hospital so we could get an ambulance to the Great North Children’s Hospital... I knew we wouldn’t make it on our own.

Most people were unaware a child could have a stroke – friends, family and even professionals.

The stroke was finally recognised 12 hours later, after they went away to get anti-seizure medicine but decided to ring the on-call neurologist who said it seemed it was a stroke.

Harrison just had one week in hospital before being discharged. Then we had nothing. I had to fight for support.

I found support through Stroke UK who were so helpful and put me in touch with The Children's Trust  Brain Injury Community Service and CBIT.

That was nine months ago. Harrison has physically recovered and you wouldn't know that the stroke had left him with right side weakness. He is even writing with his right hand again.

But Harrison does have word confusion, word finding issues and language difficulties.

Other effects of Harrison’s stroke include fatigue and personality changes. Harrison needs scheduled rest. The school were waiting for him to let them know when he needed a break but by this time it was too late, so rest periods will be fitted into his day before he gets too tired.

Being autistic, Harrison didn't like cuddles or close contact but following the stroke he hugs all the time. However, he has also lost boundaries and inhibitions and can invade personal space. He was always angry due to ASD (autism spectrum disorder), but now he tends to get more upset and cries more.

Harrison had the stroke on 30th April 2018. He spent a month at home and visited his friends in class with me because he missed them.

He went back a few mornings, then every morning. Then we added in a few afternoons and so on. I think it was a week or two before they broke up for half term. For the half term before summer Harrison went back full time.

We have an Education, Health and Care Plan (EHCP) but it has taken a long time. I think school finally applied for one not long before Christmas. We received the final copy mid-January.

Our hope for Harrison is to remain in mainstream school. However, with ASD and ADHD (attention deficit hyperactivity disorder) in addition this could be a struggle for Harrison at middle school age.

Harrison’s teaching assistant is a total star and has gone above and beyond to help him since it happened.

None of the staff were aware of childhood stroke, and there was some guilt, I feel, that they didn’t recognise it. However, I wouldn't expect them to, as even the professionals thought it was 'just a seizure'.

I said to them just to learn from it and don’t assume a fall is a fall – it could be they fell because something bad happened – like a stroke.

It is sad that finding, or getting support, didn’t come easily. I looked to charities such as The Children’s Trust to get some of the support I needed and would advise other families to do the same. We received help from The Children’s Trust’s Brain Injury Community Service team.

My advice to other parents is never give up – our son has made a miraculous physical recovery.

Harrison received support from The Children’s Trust’s Brain Injury Community Service, The Stroke Association (which has many resources for parents and teachers), and CBIT.

As we start the new year we look at the stories and advice shared by children and families in 2019.