On 27 April 2020, eight-year-old Lily was rushed to Queens Hospital in Romford after collapsing at home. “It was a Monday afternoon during the first national lockdown, and we were preparing to do some schoolwork,” explains mum Natalie. “Lily had been playing with her older brother all morning, laughing, and having fun. We could never have imagined what was about to happen. There were no warning signs.

“She came to me and said her hand felt weird. I told her it was probably pins and needles and if she just wiggled her fingers around it would go away. Lily was sure it wasn’t pins and needles and kept saying she “felt weird and didn't like it”. I laid her down in my bed to see if that would help her feel any better.

“We laid for a couple of minutes before Lily said she needed the toilet. As she went to get up, she collapsed down the right side of her body. I had no idea what was happening. I picked her up and sat her on the toilet, and she couldn't even hold herself up.”

Natalie immediately called 999 and was advised that an ambulance was 40 minutes away. After just five minutes, Lily appeared very confused and could no longer talk.

“I called 999 again and told them we couldn’t wait, we needed them to come quickly.

“This had all happened within half an hour. Lily had gone from giggling with her brother to being completely paralysed down the right side of her body. When she arrived at the hospital, Lily had lots of different tests and scans.”

Natalie continues: “We were then blue lighted to Great Ormond Street Hospital (GOSH) in London. There they confirmed that Lily had suffered a stroke. All the typical stroke symptoms that they tell you to look out for had happened to Lily – Face, Arm, Speech – but it just never occurred to me that this could happen to a child. I had always assumed that it just happened to older people. I was wrong.”

Lily spent four weeks at GOSH and it was an incredibly difficult time for the whole family, made worse by the lockdown rules in place at the time. The restrictions meant that only one parent was able to be with Lily in hospital, and they couldn’t switch.

“As Bill, Lily’s dad, had gone in the ambulance with her, he was the only parent allowed to stay. I couldn’t see her at all. We are a very close family, and this meant we were totally split. Even on Lily’s birthday. The nurses made it as special as they could for her, but I just desperately wanted to be there. It was the toughest time of our lives.”

At the end of May Lily moved from GOSH to The Children’s Trust in Tadworth. “I think we were all excited. When her team at the hospital first mentioned it, it sounded amazing, exactly what Lily needed. It also meant that as soon as she got there, I would be allowed to see her as two parents could visit on site,” explains Natalie.

“I was so thankful to be a part of her rehabilitation. Bill had been amazing, but I wanted my turn, and he needed a break. Although he wouldn't admit it. He hadn't been home for a month, seen our son Alfie, or even sat on a sofa. All the things you normally take for granted.”

“Unfortunately, due to ongoing COVID-19 restrictions, Alfie wasn't able to visit so it was still really challenging for us and the family still felt somewhat separated. I think Lily felt a bit apprehensive about it all. Meeting lots of new people, including a new rehabilitation team, and moving into a new room was all a bit scary for her. But all the staff were amazing, and they really helped settle Lily and make her feel welcome.

Lily had a busy rehabilitation schedule with sessions from 9.30am until 4.00pm every day. These included Occupational Therapy, Physiotherapy, Speech and Language Therapy, school lessons and play therapy.

“Lily was an absolute delight to work with,” said Mairi, Specialist Occupational Therapist at The Children’s Trust. “One of her goals was to improve the strength in her right arm for activities such as dressing herself and being able to do arts and crafts. It was a joy to work towards this with Lily as she always encouraged us to find lots of ways to make therapy more fun. This included learning lots of TikTok dances that included the use of Lily's right arm, making bracelets and making slime whilst using both hands. By the end of her placement Lily's right arm was much stronger and we could barely keep up with her in her TikTok dances!”

On 2 July Lily was able to ring the going home bell to celebrate all that she had achieved during her time at The Children’s Trust. “It was such a special day for us, and we are so proud of her,” said mum Natalie. “Since being home Lily still has to attend appointments at GOSH, to have further scans and angiograms etc, and these sometimes involve overnight stays, but she is doing so well. She’s also continuing the TikTok dances, she just loves it!

“Family life is starting to feel normal again. In September 2020 Lily went back to school, doing just two hours a day. Just before Christmas she had progressed to staying until 12.30pm every day and was managing this really well.

“I still feel anxious about everything that has happened and I think it will take time for us as a family to fully ‘recover’ from what happened to Lily. Going forward I would like to help raise awareness of childhood strokes, as it’s something I had not heard of, and bring families together who had been through similar experiences.” 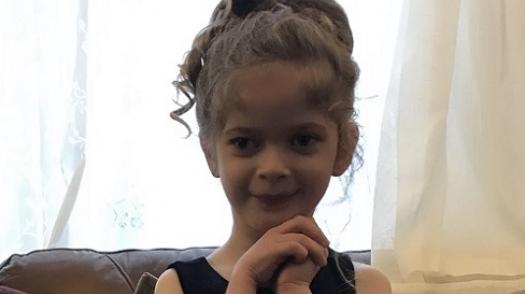 Five-year-old Sofia-Rose had a stroke at birth but faces challenges with a smile on her face and enjoys school, fashion and spreading awareness. Mum Sarah shares their story.