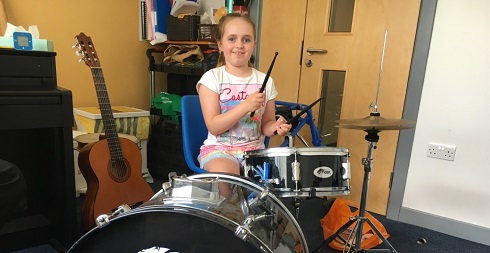 In November 2016 Jasmine was travelling home from school in the car with her mum and her sister when a van collided with them. Jasmine’s mum died at the scene and Jasmine was airlifted by Midlands Air Ambulance Charity to Birmingham Children’s Hospital where they discovered she had sustained a severe brain injury.

Jasmine’s dad, Tony, said: “I’d gone away on holiday. I was on a train on my second day in Austria when I got the call saying the girls’ mum had passed away and that Jas was badly injured.”

Tony managed to get the first flight back home at 6am the next morning. His dad met him at the airport and took him to the hospital. Tony said: “They didn’t give me much hope.”

Tony explained what happened when he got to the hospital: “I sat with Jas, talking to her, singing to her, talking about her TV shows. But she wasn’t responsive and was on a ventilator.” 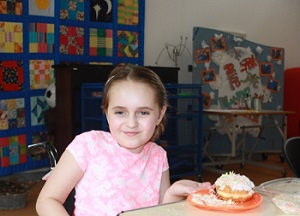 During her rehabilitation Jasmine worked with speech and language therapists and she began to talk again. Jasmine had to re-learn how to swallow safely and to eat solid food again. She had to re-learn how to stand and walk again and after a period of intensive physiotherapy Tony said: “After a few weeks, on a day that I will never forget, I asked Jasmine if she could move her arm, and to my amazement she did. This was the first time she had moved on her own since the accident. Seeing her do this was incredible.”

Music therapy was an outlet for Jasmine as she couldn’t talk. The sounds she made with the instruments allowed her to express her emotions and have some control over noises that she didn’t otherwise have.

With help from the music therapy team Jasmine wrote her own song, using lines from other songs, expressing how she felt.

Tony said: “When it was finished Jasmine and I performed the song on the instruments and one of the therapists sang. It helped Jasmine process what had happened whilst having fun.”

Tony added: “I used to sing Rockabye by Clean Bandit to Jasmine when she was in hospital. She was in a coma and couldn’t respond, but I felt like it helped. I couldn’t imagine that within a matter of months she would be singing the same song with me. I had seen the worst a parent could imagine and the glimmer of hope that I held onto was helped by music.”

Jasmine is now 11 years old and she started high school in September. The family have also been involved in The Children’s Trust’s The magical music appeal which raises the importance of music therapy. Talking about his daughter Tony said: “Jasmine is now a cheeky young girl with so much love within her”.

Did you know that around 40,000 children experience a brain injury every year? That’s one every 15 minutes.