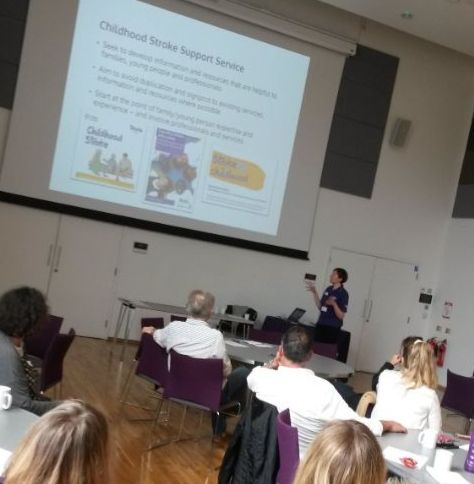 “When we came home from hospital we were surrounded by help and we thought that every person who came into the house was a miracle cure and they would make Elizabeth better.

“Elizabeth made great strides early on but slowly progress slowed down and frustration set in.

“I don’t think we appreciated the impact Elizabeth’s stroke would have on the whole family.”

Mum Danielle and her daughter Elizabeth were the first to speak at The Stroke Association’s parent support and information day in Cambridge on Saturday.

They gave parents an honest and helpful account of Elizabeth’s stroke as a teenager and how all-consuming caring for Elizabeth was until they received support from further down the line (from The Cambridge Centre for Paediatric Neuropsychological Rehabilitation – CCPNR), which was an ‘absolute gamechanger’.

Danielle discussed the challenges and Elizabeth spoke about how she became increasingly detached from friends and family until they sought extra help.

A key message from all parents at the event was the benefit of receiving support:

Dad Steven said: “Support really has improved in the last 10 years. It just wasn’t there 10 years ago, which is why Renée set up her Facebook group.  So parents should embrace all the support that’s available now.“

Support groups recommended by parents (some of which are Facebook groups) include Hemihelp, Hemichat, My Child had a stroke (run by Renée) and the Childhood Brain Injury Support Group.

Mum Fliss Hunter-Nott discussed how useful she found meeting other families in person, not only for themselves but also for the child to make new friendships with children who’d had similar experiences.

Fliss gave an example of how the mums in the support group she’s in will always ‘celebrate the small stuff’, which is a big deal to them but other mums may not relate to. For example, the exhilaration she felt the first time her son did up a button on his own.

Looking after yourself as a parent

One of the subjects spoken about by Oliver’s mum and dad (Oliver had a stroke almost 10 years ago, aged 13) was parents looking after themselves.

Mum Renée encouraged parents to talk to a professional for themselves – "even if they don't think it's needed, as the stress can build up without us noticing and PTSD needs expert help". This is especially important at transition points such as their teenager leaving home.

Renée also spoke of how, as parents, it has helped to mark the anniversary of their son’s stroke. She added that even though Oliver hasn’t always celebrated, this year he has talked about what he’ll do on the 10-year anniversary.

How schools can help

The role schools play, and understanding that they are a part of the child’s rehabilitation, was also discussed and parents had differing experiences of the support provided by their school.

CCPNR shared some insight on their work with children and young people, parents and schools. This included schools putting measures in place such as the child/young person having a buddy, and the freedom to leave lessons early due to fatigue.

Dr Caoimhe Murton, Educational Psychologist at CCPNR, explained the concept of ‘precision teaching’ where skills are acquired by learning ‘little and often’. It can be applied to areas of the curriculum that can be broken down into clear objectives.

Danielle shared their experience of working with Elizabeth’s school: “Lots of plans were made at school to make life easier but things didn’t always come through. The school understood the physical effects of stroke but it seemed difficult for them to understand it was a brain injury. Also, sometimes staff would ask Elizabeth to do things she couldn’t do, not knowing about her stroke, which was very frustrating.”

The transition from primary to secondary school was covered and Dr Murton explained how the summer holidays are a good time for children to learn practical skills over a number of weeks, reducing the pressure when term starts in September.

Tips included thinking ahead on tasks such as packing the school bags and getting used to the journey to school.

Long-term support after a stroke

Dr Lorna Wales, Research Professional Lead at The Children’s Trust, discussed the ‘latent effect’ of stroke and how children may need help at different stages, years after a stroke. A key time when a child might need intervention is the move from primary to secondary school.

Dr Wales bust the myth that recovery only happens in the first few months following a stroke/brain injury. Research presented showed that improvements can be made 1,000 days after a brain injury.

The Childhood Stroke Guidelines were cited as fantastic resource and for parents to use these and quote the recommendations when talking to the health commissioner and ask what they can offer to the child and family. For example, health professionals should provide regular consultation to educators, including both advice and brain injury training.

Dr Gillian Shravat, Specialist Speech and Language Therapist at CCPNR, explained how for pre-school children and younger the 'red book' has communication milestones in the development section that parents can refer to and discuss with their Health Visitor if they are concerned.

She said: “If parents are concerned about their child's communication or eating and drinking after stroke they can ask their GP for a referral, go to a pre-school drop in clinic or ask the school to refer to their speech and language therapist depending on the child's age.”

Dr Shravat reassured parents: “Some communication difficulties may not present till much later in the child's development so ongoing monitoring is key and it is never too late to seek an assessment.”

Organisations and groups that can provide help and support were mentioned throughout the event. These included The Stroke Association, The Children’s Trust’s Brain Injury Community Service, The Children’s Trust’s Brain Injury Rehabilitation Services, CCPNR (a service professionals can refer children into), the Child Brain Injury Trust (CBIT) and Different Strokes charity. For music specifically, the OHMI Trust charity attended the event.