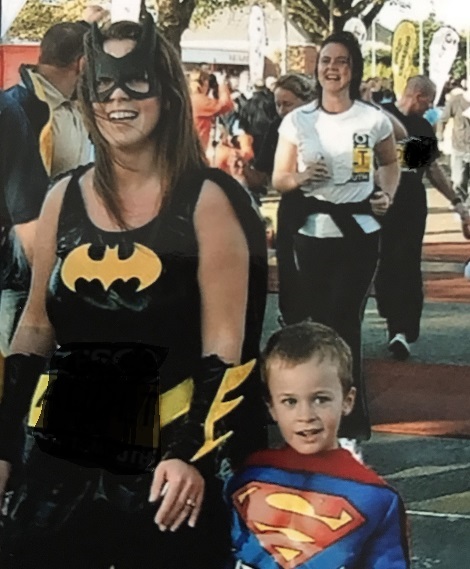 When Lewis came out of hospital two weeks later [following his brain tumour surgery at 17 months] I was a nervous wreck. He looked like Frankenstein’s monster with a head covered in stitches and I held him as if he was made of glass, terrified I would break him.

This was the start of 16 years of living under a constant cloud of fear and on a rollercoaster of uncertainty. I would wake each morning wondering whether today would be the day he didn’t come round from his seizure, or would crack his head open during a fall.

Or perhaps it would be just another day of watching him struggle with normal life, smiling from ear to ear and completely determined to live the amazing life he wished he had.

The fact that his life was so cr*p but he was always so happy regularly broke my heart, and there were days when I would lock myself in the bathroom and cry.

I felt so guilty that my son had such a hard life. He was in constant pain and could only dream of doing what his sisters or other children did. Being a mum is amazing, but being the mum of a very poorly child is far more life-changing than normal parenting.

With a healthy child, things get easier as they get older and start to look after themselves, but when your child has an illness, they don’t; things are hard every minute of every day.

When Lewis told me that he wanted to start fundraising for charity I almost couldn’t believe it. My first thought was, how can someone who goes without so much want to do things for others? But he did.

I realised then that whatever Lewis lacked in physical ability, he certainly made up for in mental ability and understanding of others. It was obvious that he could make his voice heard and that there was something very special about him that made people want to help him.

As you’ll have read, Lewis’s story is not as simple as ‘Lewis was sick, then got better, did some fundraising and became a hero’.

The truth is that his condition isn’t curable, and he spends a lot of his life either in his hospital bed at home feeling unwell, or actually in hospital. His shunt keeps him alive but if it blocks, or gets infected, then he’s in a life-or-death situation.

That’s quite a responsibility for someone with no medical experience. It was very stressful, but I soon discovered that a mother’s instinct is a real thing and that I could trust it. In fact, on a few occasions, that instinct saved Lewis’s life.

Emma’s blog is taken from her son Lewis’s book Looking at the stars. Lewis’s charity and campaign is Friend Finder, helping chronically ill and disabled children have fun and make friends. Lewis is now 17 years old – he has been in and out of hospital since he was diagnosed with a brain tumour at 17 months old.

In our three-part series, mum Emma shares her experience since her 17-year-old son Lewis was diagnosed with a brain tumour at 17 months old.

Mum Emma she explains how her teenage son Lewis’s disability hasn’t stopped his determination to set up a charity so no child faces childhood illness alone.

This summer we’ve been gripped by three books – all covering disability and brain injury from different perspectives.