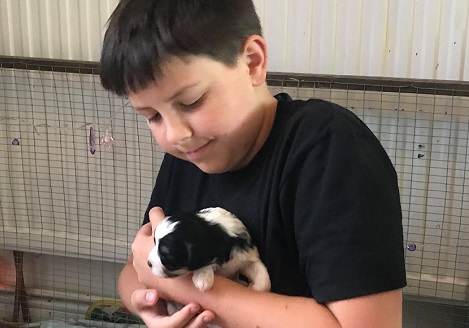 In November 2013, my eight-year-old son Isaac had a traumatic brain injury when a horse kicked him in the head.

Two months later, Isaac returned to school part-time (this was recommended by a neurosurgeon). However, the six months from January to July 2014 were a period of intense stress and Isaac was developing mental health problems.

I started to home school Isaac in September 2014 and the next three years were full of challenges and mental health issues; it has been hard, hard work. The stress led me to give up my business in 2017.

During this time I began adopting different approaches, observing and chronicling Isaac’s behaviour. I felt tailored support could help him overcome some of the challenges he was enduring.

The support has come in the form of sports coaching; freedom for Isaac to reconnect with himself and determine his own route map; and unwavering belief and support.

Finally this year we’re turning the biggest corner. Things are falling into place. My son is emerging. His confidence is soaring; his anxiety is decreasing; his capacity is widening. He is happy. He is achieving.

Here is my story…

The past four and a half years my son has been on a wild ride of ups and downs. Challenges have included his mental health, biological brain damage (mostly affecting speech and memory), anxiety, agoraphobia and crisis of identity.

Isaac had a few neuropsychological evaluations – but these proved pretty irrelevant to the progression of his life and symptoms and traits.

High anxiety was always noted. He had great spatial awareness and impressive fine motor skills but impaired verbal reasoning and comprehension skills. No therapeutic interventions were suggested by the NHS.

Following the advice of professionals, Isaac returned to school for six months soon after his accident but in my opinion this was ill advised and poorly executed. There was a significant lack of helpful insight and flow of knowledge between the hospital and the school. Isaac and I were both let down.
Isaac was only part-time at school but it soon became apparent he wasn’t coping and was becoming very stressed. This showed itself after the school day in aggression, disconnection, nervous tics and distress.

The school and doctors concluded that Isaac was fine in school and despite sending letters and attending meetings, I was unable to make myself understood.

During the summer holidays Isaac gradually became calmer – but I found myself suffering from considerable stress and anxiety. I felt misunderstood by everyone and this was the start of my marriage breaking down.

Along with feeling exceptionally isolated by family and professionals my mental health suffered and everything seemed overwhelming.

The return to school that September was brief. I tricked Isaac into going, as I knew he didn’t want to, but enough was enough. My son was traumatised and I made the decision that he would not return to school.

The start of homeschooling

I feel that the teachers were blind to mental health distress and that if Isaac had remained at school he would have become more distressed, more violent, aggressive and unhappy.

There was a lack of empathy and sympathy from teachers, the head teacher and psychologists; I feel a wave of anxiety when I think back to those days.

We took refuge, backed away from the world. We ensconced ourselves in our home. Isaac desperately needed to recuperate from his accident and to have a rest from an overwhelming world.

Gradually he withdrew more and became less capable of interacting with the world. His friendships fell apart; his sports clubs became too much for him. We read and played games and had a relatively ‘safe’ life.

Unfortunately, my marriage broke down. A trauma either pulls you together or tears you apart. My husband and I had very different psychological responses to the accident.

My response was quick and dramatic with highs, lows, depression, anxiety, anger, and ultimate acceptance.

I found hope and my intense love for my son gave me purpose and unwavering dedication. I love that child beyond imagination.

Identifying and responding to Isaac’s needs

Within a few months of the accident, I’d set out on a mission of recovery and recuperation for Isaac. I’ve generally relied on my instinct.

Home schooling Isaac gave me the chance to be an observer and a chronicler. I know the better weeks and the worse weeks; the emergence of new mental health issues; the depths of distress; and the contributing factors.

I remember the sadness I felt as my son failed to progress and thrive. The identity crisis and crisis of confidence; he was shattered.

An 8-year-old is ill equipped to suffer a medical emergency; an unsupported return to a previously happy and successful environment; his parents to argue and eventually split up. I wanted to hold that boy so close and to protect him and to soothe his troubled life.

I gave Isaac a largely autonomous lifestyle as I felt that he needed not to be criticised or corrected; he had lost his confidence by not ‘feeling right’.

Isaac had imagined that he could return to his pre-accident life, go back to excelling in school, to being great at everything – having friends, doing school work, sporting prowess. He had been such a fortunate child, life had been easy and accessible for him pre-accident.

Post-accident and post traumatic return to school experience, Isaac was a very different child; a shadow. Isaac needed to find himself again.

I worked on his confidence and wellbeing. I wanted him to connect with himself again, to become true to himself.

By choosing when he woke, when he slept, what he ate, what he read and watched on TV I felt I was giving Isaac the agency in his own life that he needed to compensate for feeling so ill attuned.
I jumped through hoops. I constantly modified my behaviour to compensate for his. I changed the goal posts on a daily basis.

I looked everywhere for answers. I read books about brain injury; about personality types; about developmental disorders; about nutrition; and about movement therapies. 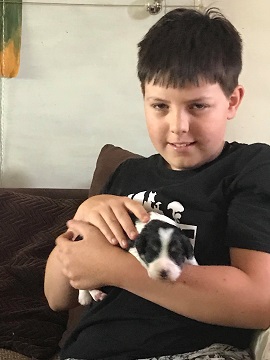 This study transformed me. I increased my capacity to step up and be enough for my family. I became a leader packed full of knowledge and insight and my trademark intensity.

It has been a long journey. Four-and-a-half years later 2018 showed her face. I see incredible and happy progress. My heart swells with relief and disbelief as my son finally tunes in to himself, is happy with friends and thriving with hobbies, talents and sports.

This is the result of dogged determination, love and devotion, serendipity and inspired decisions and opportunities.

Nicola Leyland’s Ruffled-Unruffled is a listening and support service to mums of brain injured children.

She brings alternative perspectives to brain injury recovery via blogs, videos and interviews. The Ruffled-Unruffled community is on Facebook.

A kick from a horse left eight-year-old Isaac with a brain injury.