Lewis wanted to spend time with children and young people whose lives are similar to how his life was two years ago. Here he shares his memories of rehab and his recent work experience.

Lewis remembers going to a lot of sessions including occupational therapy and speech and language therapy.

Physiotherapy was usually twice a day and Lewis says it was good to be in a room at the same time as other people in their sessions: “All the people had a comradeship with each other. It was really encouraging because when I saw other people do better than me it inspired me to work harder.”

The sessions could be tiring and Lewis told us: “At the beginning of the day the children are usually full of energy and look forward to all parts of the day.

“However, I noticed at break time that I started to run out of energy. Now I can last through a day but the young person’s life is very difficult at that time, especially at the beginning.”

Explaining why things were hard Lewis says: “I was taken out of the shell of the hospital, and put into a (strange) place with weird people all greeting you. However, I could not even remember anyone's name.”

He explains that he found conversations hard and they usually went:
Person: “Hi Lewis, how was your weekend?
Me: “Fine, thanks… (shift around as I have no clue what to talk about)”
Person: “What do you have today Lewis?”
Me: “Sessions, (mumble for a second) School, PT, lunch, OT, HPSA. School now.”
Person: “Oh, that's fine, it was nice talking to you though, hope I see you soon”.
Lewis has strong memories of conversations like this, where he wanted to talk, and he could remember how, but he didn’t do it, even when he was ‘full of energy’.
He remembers people wanting to be kind but he found he had little to talk about.
Lewis says: “I was kind of reserved but apologetic”. He says he wasn’t really ‘being himself’ and got tired near the end of these conversations.
“This definitely improved over time because I started to think about other people and not just myself,” says Lewis.

Another strong memory is the point where Lewis’ speech therapist changed the sessions from being about memory to trying new things like composing sentences.

Explaining what he thought about while he was in rehab, Lewis says: “Well, I thought most people were hyper advanced cyborgs (this might just be me being a boy that is very into technology); I thought about what sessions I had; my memory of past things (not great); where am I?; who am I?; a lot of ‘at the moment’ (far too literal); and when can I sleep?”.

Lewis also remembers the different people he met: “I remember one child was mostly speech-blind (he could mostly say one-syllable words) and could not use his right-hand at all. However, on his last week he started showing major signs of recovery.”

Lewis and his dad saw the boy near the end of his rehab and said ‘hi’ and the boy swivelled around and this time he said ‘hello’.

Lewis says: “From that point onwards I was very happy as I could see there definitely was a light at the end of the tunnel. This was because I never really saw anyone else just before discharge, especially near my age.”

Work experience at The Children’s Trust

Explaining why Lewis returned to his rehab setting to do work experience he says: “I wanted purely to help all the children to progress further and make them smile because of it, even if I contributed minutely.

“There are many reasons why I did it – be it for the children's smile; to say thank you for having me in 2015; to see what life is like through therapist’s eyes.”
Lewis says of his work experience: “I think it has been a great boon for me (and hopefully some of the children).”

Speaking about the children, Lewis says: “For some reason they looked a tad grumpy at the start each day knowing that they have to go through more sessions, but in actual fact I found that while I was a ‘patient’ at The Children’s Trust.”

Lewis liked seeing ‘all the children's glad faces after going to their session’ and says: “The fact that I knew (roughly) how the children were feeling allowed me to get to new places because I could tell when to back off or make any small adjustment to what I was doing.”

The Children’s Trust thank Lewis for taking the time to do work experience and providing the Brain Injury Hub readers with a very useful insight. 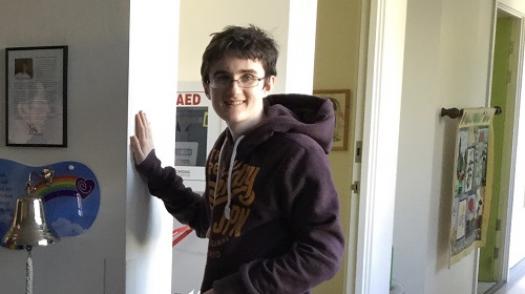 In 2015, 15-year-old Lewis was left with a brain injury. Now aged 21, Lewis shares his experience of school, college and university.