The whole family was at home that evening. Valentina had been sent to bed at around 8pm as a doctor was visiting my husband. Instead of going to bed, she went to both her siblings’ bedrooms. When they then told her to go to bed, Valentina started playing on the banisters.
We lived in a three-story house at the time that had a marble floor.

Valentina sat on the banister swinging her legs back and forth and overbalanced. She fell 28 feet onto the marble floor landing headfirst.

I was in the kitchen with the door ajar when I heard a very faint noise that sounded like a bag had been thrown over the side of the banister – like the children often did. Then I heard my son Noah screaming my name. I came into the hall and saw Valentina lying motionless on the floor.

Noah explained that she had fallen off the banister, but I thought he was referring to the bottom part which was around 12 feet off the ground. When I realised what he meant, that Valentina had fallen from the top banister, I was beyond panicked.

What followed was a blur of paramedics, police, and the amazing Essex & Herts Air Ambulance team. We had around 20 different people in our hall working on Valentina trying to save her life.

Valentina was taken to the Royal London Hospital where she underwent lifesaving surgery – an emergency craniotomy – before spending 10 days in an induced coma. It was without doubt the worst time of our lives.

The uncertainty of what was happening and how Valentina, the baby of the family, would recover turned our world upside down. I moved into the hospital to be close to Valentina every day and concentrate on nursing her back to health. It consumed every waking minute of every day and everything else just had to be put to one side.

We stayed in the hospital for almost 12 weeks, even spending her 10th birthday there, and slowly Valentina started to make progress. She had a long journey ahead of her, relearning all the skills she had lost as a result of the accident – standing, walking, writing and talking – but she had made a start.

Christmas at home and starting rehabilitation

The Children’s Trust in Tadworth was mentioned to us early on in Valentina’s hospital stay, and thankfully she had a placement confirmed for as soon as she left hospital.

As it was late in December when she was discharged from hospital, we decided to spend Christmas at home as a family and started Valentina’s placement at The Children’s Trust just before New Year’s Eve.

When we first arrived onsite it felt quiet, but it quickly got busy with Valentina’s schedule of physiotherapy, speech and language therapy, occupational therapy, and more. Meeting other families staying there, I realised both the variation and the complexity of health and care needs The Children’s Trust provide.

I felt incredibly grateful for how far Valentina had already come, and while her therapy team helped to build up her strength and mobility, most importantly they uncovered additional things that she needed support with.

These were things I didn’t even know about as it was all still so new to me. Valentina had recovered so well physically that I hadn’t recognised a lot of the other effects of her injury. About 90% of what Valentina was struggling with was mental – her cognitive skills.

Valentina really enjoyed her evenings in Tadworth. It gave her a chance to play games, take part in cooking activities and join in with dance classes. She even got involved in producing The Children’s Trust’s Step-by-step Cookbook.

All these things helped Valentina work on her social skills, interacting with other young people staying in the same residential house. Valentina also liked swimming in the specialised hydrotherapy pool. Her love for the water hadn’t been lost as a result of the accident and she was still a really strong swimmer.

Going back to school during the pandemic

The Children’s Trust provided the whole family with a safe place to ask questions about Valentina’s injury, and watch her progress. We all feel so grateful for the second chance Valentina has been given. Things have not always been straightforward, but she continues to amaze us with her progress.

Going back to school was one of Valentina’s biggest goals. However, going back during the Covid-19 pandemic, and being put back a year, proved extremely hard for her. She has struggled a little making new friends and her social skills have suffered as she can be a little over friendly and very loud at times.

Without the help of The Children’s Trust, I do believe it would have taken a very long time to discover all the more cognitive and social issues Valentina has, and that we are now working on. It also helped build her confidence. When we first arrived in Tadworth I thought there is no way she would be there for the full placement – 12 weeks – but she needed every second of it.

Watch Teeny - 1 year on... a video of Valentina's year following her brain injury, made by her brother. 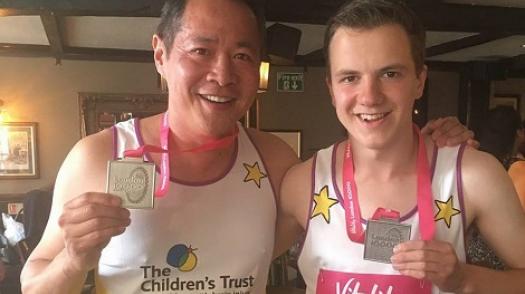 At age 16 Michael was on a Duke of Edinburgh expedition when he fell down steep steps and suffered a brain injury. Michael is now 19 and heading to university – he shares his story.

The Children's Trust has produced a special ‘easy to follow’ recipe book, developed by children and rehabilitation therapists, for the whole family to enjoy and have fun in the kitchen.