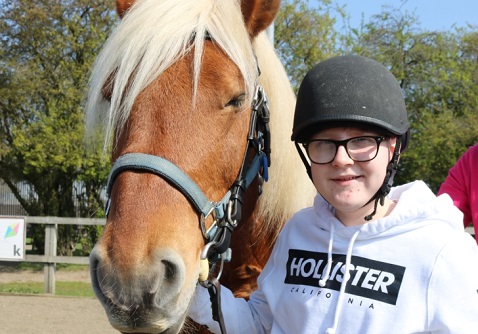 Ethan started getting headaches and fatigue at the age of seven and was diagnosed with a brain tumour in October 2012. Just over a year after, at the start of 2014, Ethan had rehabilitation at The Children’s Trust (TCT).

I wrote about Ethan’s experience when he was 11 years old, which you can read here. The first time we were at TCT Ethan was nine years old and still very ill. He couldn’t speak, hold his head up or control his legs and arms. Ethan was tube fed, had just finished chemo, and had an operation on his tendons and biopsy on his tummy during his stay.

While rehab was brilliant for Ethan, and he came a very long way, there was an awful lot going on in those six months.

Ethan is now 14 and has just finished an eight-week course of rehabilitation at The Children’s Trust, five years since he was first here.

From TCT to home 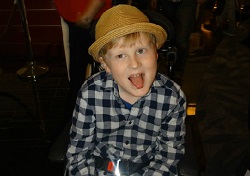 Following Ethan’s first stay at TCT he made good progress. I carried on with the physio that I had learnt watching professionals, but when Ethan was nine to 10 years old he would get very cross and have meltdowns.

Ethan would reach a point where he had had enough and say he was not doing it. But as a parent you don’t want to sit back and give up – you have to keep plodding on.

Ethan has ataxia, which affects his coordination, balance and speech. He uses a wheelchair and has a scribe at school.

Ethan has hydrotherapy at the local pool with me and physiotherapy. Funding for NHS physio is limited so we’re fortunate to have secured private physio funded by the Danny Green Fund. The fund has helped us for the past three years, and in school holidays too.

Private physio was twice a week but, with an hour’s journey each way, a session would take up most of a school day so Ethan now goes weekly. When he’s there he might go horseriding or on an antigravity treadmill with a harness.

Sometimes I’d drive an hour to physio and Ethan would only do 10 minutes. You have days like that but as Ethan has got older he has been more willing and realised the benefit of the things he does.

Ethan’s been willing to do voice exercises and breathing. And he has learnt a wind instrument for breath control. You just have to carry on. It’s why I attend most sessions – to see how he does and learn to do the activities at home.

My role as mum 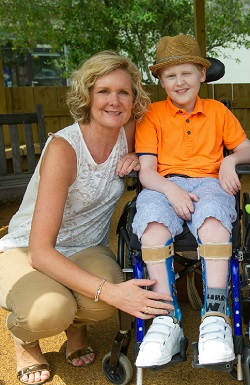 I’ve always played a part in Ethan’s therapy and I research what might help him and give it a try. Not everything works but that’s the way my husband and I think and we’ve tried a lot of things like Mollii suits and exoskeletons.

Ethan might think I’m a ‘tough’ mum at times. I don’t let him use the wheelchair in the house – he either walks with us or with a walker. The house is adapted but we don’t want to give up and stop him trying.

The only trouble is I might be ‘too hands on’. I do try to get him to do things but sometimes it’s easier to help him get dressed in the morning, especially with lycra. We’re only human and we don’t always have enough time, or Ethan won’t eat breakfast and it can be chaos! But saying that Ethan will always dress himself at weekends and get undressed into casual wear in the evenings.

When Ethan left TCT the first time he went into Year six. He was part-time and had lots of time at home, then when he started high school he had a part-time rota and went to hydro on Tuesday afternoons and physio on Saturdays.

Last year, Year eight, Ethan started full-time school. I take him and pick him up as it’s less tiring than getting the bus.

Ethan is in mainstream school – he has the same teaching assistant most of the time (he’s mostly had male TAs, which is good).

At school Ethan has an electric chair and a walker – but the electric chair stays at school. We’re trying to arrange Ethan to walk between school sessions now. So he’ll leave a class 10 mins early before the corridors get busy. It’s not a huge school so that helps.

Ethan uses the gym at school and he has a programme from the physios.

Ethan sits in a Breezy wheelchair. At school he can get a bit frustrated, very tired and has problems with his memory. We are trying to work on things and our placement at The Children’s Trust looked at cognitive learning to feed back to the school.

Ethan’s now of an age where he’s old enough to go out with his friends. He has a mobility scooter at home and we live near the sea so he goes out with friends to the seafront. That’s a lifesaver to keep up with his friends as a 14-year-old.

It is hard to let go as a parent – there are the cars and paths and you say to his friends ‘please be aware of the kerb’ etc. He doesn’t go on his own, but with mates it’s fine. And if his friends have gone home he’ll let me know and I’ll walk with the dog to collect him – but then walk behind him as we return home!

As well as going out with his friends Ethan likes cooking. We went to Berlin and Ethan made a currywurst sauce for hotdogs, which he then made from scratch once home. 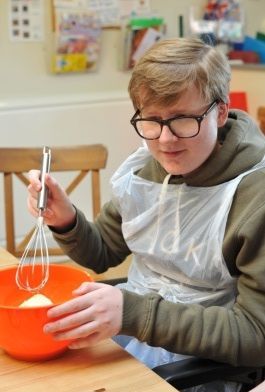 Ethan’s accommodating and engaged and generally up for most things.

But Ethan does tend to be really enthusiastic at first then gives up. We were going to a shooting range near home that he really liked – it was an Olympic one for disabled people as well as non-disabled people and the guy teaching him was an Olympian himself. Ethan was really into it but then it would get tiring and his shot wasn’t as good as his friends – so he stopped going.

Before Ethan was poorly he was always into things like climbing or quadbiking. Never football. Ethan’s always wanting to do the extreme. He has done iFLY, which is like a skydive inside a tube. I really didn’t think he’d do it but we found somewhere in Milton Keynes and they were very good with him.

Next on Ethan’s list is more rafting – it’s the sort of boy he is! Although he does really like his Xbox too!

As a family we’ve been on a few holidays and one we loved was Centerparcs, which the Danny Green Fund paid for. We hired bikes, and Ethan could go in front, did archery, swimming, laser tag in the woods and the staff helped Ethan build a den in the woods. It was a very good break.

We’ve learnt along the way too. We went to Malta as a family and all the roads were cobbled, which did make it less enjoyable.

One of our best breaks was Berlin – the most adapted city centre in the whole of Europe. Everything was accessible and it was easy to get about – maybe because they had the Olympics there. It was very cultural and the whole family enjoyed it (including Ethan’s older brother) and we all went on the tours.

Ethan was doing well but last year we had a wobble. Ethan wanted to walk again and as a teenager he wanted to get more independence.
I spoke to lots of people about help. Someone mentioned the idea of going back to The Children’s Trust. We tried to get the community paediatrician on board but there were issues with funding.

Things were becoming tougher for Ethan – he was very low and the school was concerned. Ethan had spoken to the school chaplain about having ‘lost his opportunity to walk’. Ethan had matured and realised what was going on. He was referred to a psychologist.

The school was increasingly worried and Ethan’s psychologist felt he should be given the opportunity to try to fulfil what he wanted to do. In Ethan’s life he had never had a choice, or made his own decisions, and now as a teenager he was desperate to become more mobile.

Ethan would also get very stressed and worry too much about school.

A placement at The Children's Trust 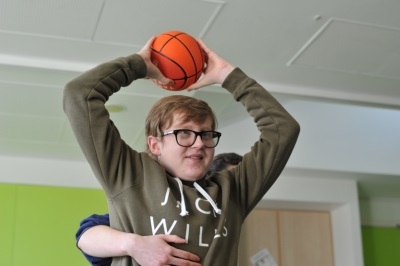 Ethan arrived at TCT in February and has just finished his eight-week placement. His rehab aimed to increase his participation and independence. In the first week he did a four-point kneel and wobbled and fell over. By week three he could do a four-point kneel and do exercises in that position, stretching his hand out etc.

We watched Ethan achieve more week by week. The first week Ethan played giant Connect 4 on his knees and he was wobbling all over. In the third week he did the whole game on his knees.

Ethan became much stronger and more confident as the therapists worked on his shoulders to strengthen his back and help him stand up.

The therapists at TCT learnt how best to work with Ethan. For example, not giving him choices but saying ‘let’s stand up’ rather than ‘shall we stand up?’.

Ethan’s a typical teenager – he’s very good at not doing ‘exactly’ what he’s asked and might try to waste time. So I attend most therapy sessions.

Basically I am Ethan’s physio at home so I want to know the best exercises.

The therapists gave me lots of exercises we can do at home – like four-point kneeling with Ethan stretching his arms out. We’ve also got a programme so Ethan can come to the local gym with me – he can go on the rower, possibly the bike, and the treadmill. At TCT I learnt how Ethan could best use gym equipment and how to get him on and off his chair to use it.

At TCT Ethan walked more with a walker, played football and used the standing frame. We are hoping to get a standing frame at home.

Ethan has really strengthened his muscles. When Ethan first arrived and went horseriding people had to hold his feet, his knees and his hips. Within a few weeks he was on the horse with his hands on his head with only his ankles being held. That’s quite an achievement and it’s good as it helps engage his head, core and balance. 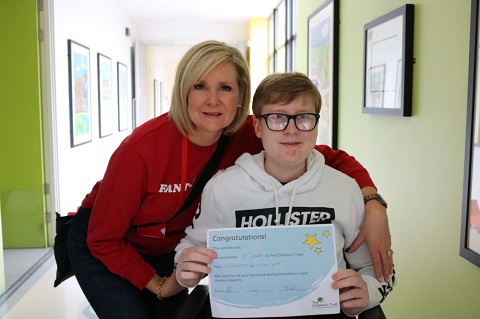 We’ve just returned home [April 2019] and had a special treat at TCT on Ethan’s last day of rehabilitation. A convoy of supercars visited Ethan ahead of The Supercar Event 2019.

I’m so proud of Ethan, he has progressed so much since he first visited The Children’s Trust in 2014. Back then, he couldn’t speak, hold his head up or control his arms or legs. Now, he’s due to choose his GCSE options and he’s taking steps in his walker.

Supercars were the perfect leaving present for Ethan. He had such a great time and it was really special for us all. 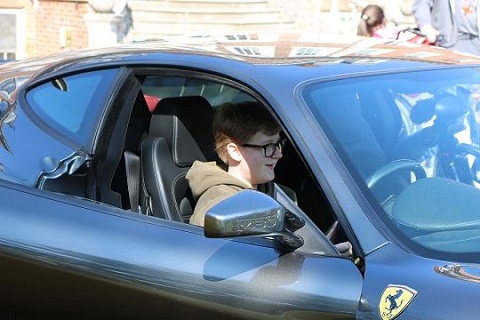 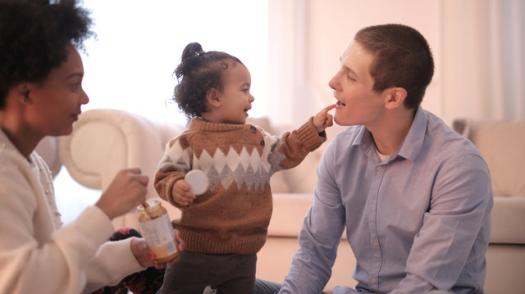 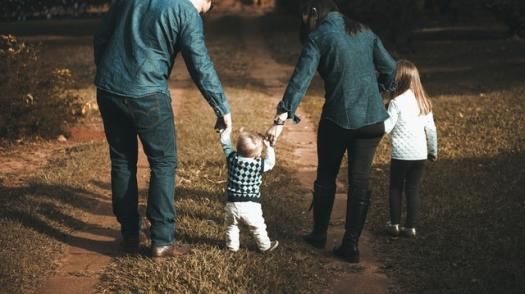