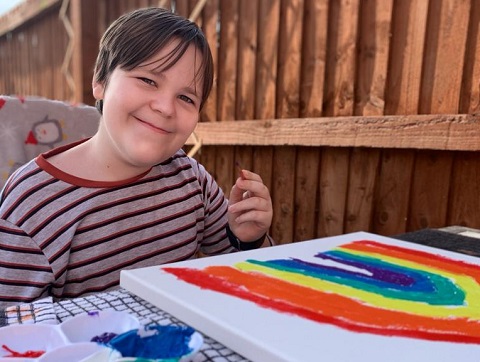 Joey had arrived at school in November 2018 when he developed a strange taste in his mouth. He went to get a drink of water but discovered he couldn’t talk or use his right arm.

It was terrifying because you expect to maybe be called to school to say your child has hurt themself, but not that they have stroke-like symptoms.

When I got to Joey he had also lost the use of his right leg. He had been in school just 15 minutes.

I was in utter shock and couldn’t believe what was happening. When I’d dropped Joey off at school he was his usual self. It was just a normal day which had quickly turned into my worst nightmare.

My husband Nick and I rushed Joey to our local hospital. On the way he suffered a seizure and lost consciousness. I’m a medically trained midwife, and I carried out CPR until we arrived at hospital.

A scan discovered Joey had a life-threatening brain haemorrhage caused by a ruptured Arteriovenous Malformation (AVM), which is a tangle of abnormal and poorly formed blood vessels in his brain.

When they told us Joey might not make it, it was like I was experiencing an out of body experience. I remember movement going on around me but I wasn’t taking anything in.

Joey was blue-lighted to Alder Hey Children’s Hospital for emergency surgery to remove the blood vessels. It was a life and death situation and we prepared for the worst. The operation took seven hours and afterwards Joey remained in an induced coma for three days.

When Joey woke, he had lost function in his right side and couldn’t walk or talk. We devised our own sign language so he could let us know if he was in pain or he needed to go to the toilet.

That first week felt like a million years. Everything in our lives felt like it had changed.

Joey was in Alder Hey Hospital for four months.

He started an intense rehabilitation programme to learn how to talk and walk again just days after surgery. It included physiotherapy, aquatic therapy, and speech and language sessions, as well as work with an occupational therapist to prepare us for when he eventually returned home.

Joey had to relearn everything again, including working on building his movement back in his right arm and hand, while learning how to write and draw with his left now.

By December Joey’s feeding tube was removed and he was able to stand using a frame. It was huge progress, and Joey was allowed home for his first weekend visit.

It felt great to have a ’normal’ weekend, even going into town and having a muffin in the café.

Joey loved the weekends at home but they were also very tiring for him. What seems like a bit of socialising to others is really tiring for Joey, and the fatigue is like exhaustion on another level.

Home and back to school

Fifteen weeks after his haemorrhage, Joey was discharged from hospital. He was now able to walk short distances on his own.

A month later Joey went back to school for the first time. Joey was a bit nervous but it was good once he got there and saw all his friends. Gradually he built up to going to school for one-and-a-half hours a day, three days a week.

We got a place at The Children’s Trust specialist centre in Tadworth in August, for an eight-week course of intensive rehabilitation.

We were apprehensive as we had got used to our routines at home by this stage and it meant delaying Joey’s start to secondary school, although we knew he would benefit from it.

We arrived to a lovely personalised room with posters and things Joey liked, which set us at ease. Joey really embraced life there straightaway.

Rehab was hard work – it involved speech and language therapy, occupational therapy, aquatic therapy and physiotherapy sessions – but there was also lots of fun and games.

It was hard being away from family but Joey made brilliant progress.

Life at home – and in lockdown

Joey came home from rehab stronger and more determined than ever.

He started high school in November, doing two split lessons a day due to his fatigue and concentration.

Joey struggles a lot with fatigue – it can happen several times per day and it’s not like your typical tiredness. When he is fatigued he struggles to communicate effectively. There is no real cure but to have a bit of quiet time to recover.

While we’ve been in lockdown, Nick and I are responsible for all Joey’s therapy needs. It’s scary as we aren’t qualified, and we’re worried that we will miss something important.

We have been able to do a physio session every day but I do worry if this goes on for too long we won’t have done enough to keep him on track.

Every day is different depending on his tiredness or even on our stress levels, but we try to stick to at least two school lessons, one active session, some down time like drawing and some social time such as chatting with friends online on the PS4.

Some days are better than others but I’m staying positive. We’ve already been through so much in the past 15 months. We know we are strong and can get through anything. We just need to take it one day at a time.

Joey has been so brave. Since he was aged two, people have called him Joey the Legend but now he has really proved that is exactly what he is. His Instagram profile is @joeythe_legend, where we continue to document his journey.

We still live in shock that our little boy had a stroke. It's the first thing we think about when we open our eyes and the last thing on our minds as we drift to sleep.

We don’t know what the future holds but what we do know is that Joey will do everything in his power to get to whatever will be his ‘normal’.

The fact that Joey is here is amazing. How well he is doing is amazing. That he’s stayed with his year group at school is amazing. He’s happy and he is getting on with life and we are so grateful and thankful, even though our hearts still break for what could have been.